Robert Bracaliello, President & Executive Chef, began his professional life by first earning a B.S. in Psychology and Criminal Justice at Rutgers University. During these years he worked at a local restaurant to pay his way through college. Here he began to understand how good food along with great service puts a smile on a customer’s face and allows them to forget about “life” for a while. It was this experience that became ingrained in him and fostered a love for food service. He realized that taking great ingredients and combining it with a welcoming atmosphere allowed his costumers to relax and enjoy the moment.

Upon completion of his degree he was inclined to find employment in his area of study. Robert took his degree to help others and became employed as a counselor for troubled teens. His passion to help others meet their needs allowed him to hone his listening skills. This ability, paired with his drive led him quickly into supervisory positions. Robert assisted in the expansion of the company and witnessed the need for defined roles and efficient procedures. He became responsible for running staff trainings, creating policies, and working within a non-profit organization’s budget. Robert’s passion for food never left him and eventually led him to culinary school in California. Here he became versed in a wide array of cuisines and earned an A.A. in Culinary Arts.

Following his schooling, Robert was employed as a cook in restaurant kitchens throughout Los Angeles, and later as a Personal Chef. Residential Dining Solutions, Inc. bridges the personal chef and catering professions. RDS is a result of Robert’s ability to listen to the needs of his clients combined with his love of food and experience running a professional kitchen. This company seeks to emphasize great food, but first and foremost listening and prioritizing the needs of its clients. We realize you can get a great meal anywhere in Los Angeles, but we believe that food always tastes better when combined with exceptional service. We strive to address each client’s individual needs and translate them into gourmet family style dining. Our goal is to make you feel that we have been part of your “family” for years. 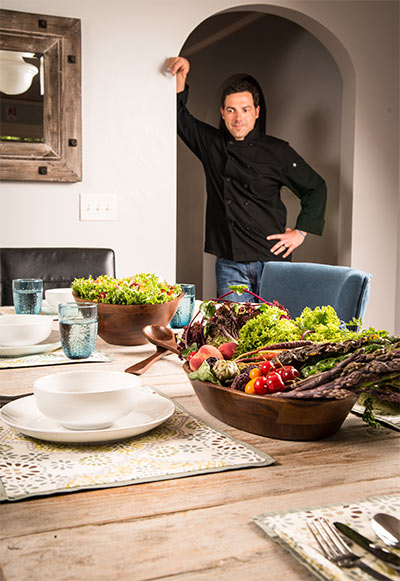 Call Residential Dining Solutions at (626) 372-2254 to see how we can help with your food service needs or click below to send us a message.

Send Us a Message